Wireless ISP’s (WISP) – the other white meat of the broadband world.

I have been providing RF Engineering services to the Wireless Internet Service Providers (WISPs) for a number of years now and watched this segment of the broadband industry grow and mature. Today this industry is made up of mostly small business owners who can reach over 75 million households! That is over 71% of the homes in the US. 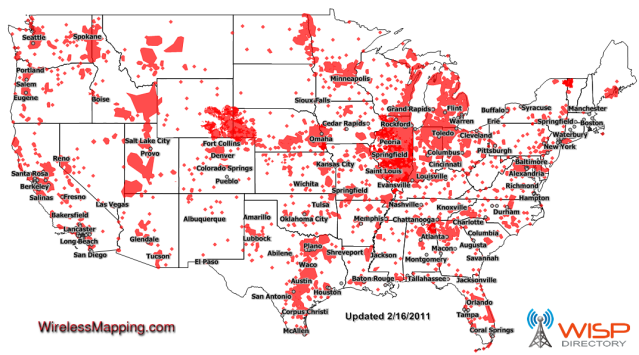 WISPs do this without subsidy from USF, and mostly without other public funds. They started from small humble beginnings and grew using money generated from the actual business. They don’t have 6 figure base salaries and they don’t burn through stockholder money to create their golden parachute. It’s a novel approach to the Telecom business model. Most of them have used a super secret accounting formula:
Income – Expenses = Profit
Most do not hold any special status at the state level such as designated telecommunications providers giving them special status for zoning or pole rights. They have serious struggles.

Being small business owners they also have a keen sense of the market space and they can react quickly to changes. Their equipment has advanced much more rapidly than other broadband technologies. Today they are capable of delivering 5, 10, 15 and even 20 meg connections to the consumer. They have the lowest cost per home passed of any broadband technology. They prefer to do it all without help from the taxpayer or the Universal Service Fund. The one thing they do lack for future growth is spectrum. There is a need for more frequencies or channels to satisfy the consumer demand for bandwidth. Congress has created a serious roadblock to getting this spectrum. They are called auctions. Below you will find a very nice write up from one of the founding members of the Wireless Internet Service Providers Association (WISPA). He has explained spectrum auctions in terms better than anyone I know. Take a moment to read this and then decide if auctions do the public a real service.

Do you have little or no access to broadband (high speed) Internet? Then forward this note to your Congressman to get this fixed.

Broadband is something most Americans take for granted. That is unless they live in remote rural areas where cable modems and DSL are rarely available. For rural Americans real access to broadband is limited at best and often is non-existent. Thousands of small companies called WISPs (Wireless Internet Service Providers) have been working for over a decade to bring people broadband in the harder to reach areas of the United States. Thousands of United States WISPs use radio airwaves , also known as spectrum, to transmit broadband through the air from central locations to customers throughout rural parts of America.

WISPs are usually started up by a local person with technical knowledge who is an entrepreneur and has decided to take on the effort to bring broadband to their neighborhood, their town or even their whole county.  WISPs transmit from existing small towers, water towers, tall building roofs, grain silos, whatever it takes to deliver broadband through the air. They fund their operations using all they have, they borrow against all assets they own, they spend all their savings. There is at least one WISP who was a family farmer and actually “sold the farm” to build the WISP he started in rural Indiana. WISPs are a growing part of our economy employing tens of thousands of Americans to help them serve broadband to rural America.

WISPs work against many obstacles to build broadband into areas where the population is so small that a business case would not normally work. By being frugal and doing much of the work themselves WISPs have found a way to make this a thriving business by solving the “digital divide” for their neighbors while earning a good living and often hiring others in their area to help them. There is one obstacle that all WISPs face that is not only preventing millions of Americans from having access to broadband now but is threatening to kill their industry completely.

SPECTRUM AUCTIONS ARE KILLING WISPS AND ARE PREVENTING AMERICANS FROM HAVING BROADBAND.

There is a dirty little secret hidden in plain sight in the United States. If big businesses were bribing the government to prevent competing small businesses from having access to government owned assets and reserving these assets for themselves one would think we would see people calling to have these people tried for corruption. Instead we are seeing it happening regularly with practically nobody giving it a second thought. It may be a much more formal and open process than bribes but the net effect of Spectrum Auctions is exactly the same. Big Businesses are the only winners of these spectrum auctions and WISPs are left with no access to good spectrum.

Spectrum is to a WISP what good land is to a farmer. Without good land a farmer would not be able to deliver much food to market. At this time there is no practical way for a WISP to reach all homes and businesses within what should be the coverage area of their tower locations. The reason is that WISPs have ZERO access to good quality spectrum. WISPs have to use uinlicensed spectrum which has no protections against interference. It is shared by other users of the frequencies. This spectrum is only barely usable for the delivery of broadband when there are trees or other obsructions blocking clear line of sight to the WISP tower locations. Low power restrictions, noise and higher frequencies of the unlicensed spectrum mean that only a portion of potential customers can be served within WISP tower locations. Depsite these limitations WISPs have built their entire business on using these unlicesned frequencies to bring broadband to where it never was before. If WISPs had access to good spectrum then they would be able to build higher quality wireless broadband which would be available to all rural Americans. Plentiful access to good quality spectrum would also mean that prices would lower as more people per tower would be buying the service which would allow for a better return on investment for each tower built.

Spectrum Auctions happen now because Congress tells the FCC they have to sell off the all-important spectrum licenses at auction as opposed to allowing WISPs and others to pay for licenses with monthly fees or register them for free if they prove they are serving the public good with broadband. Congress and the FCC tell the public that auctions are good because they raise billions of dollars in auction revenues.

If Spectrum Auctions are so good for America then why do we still have large areas where services are not available after 20 years of selling off spectrum to the highest bidder?

Why are we selling off the airwaves to the highest bidders and then turning around and giving away tax money for people to build broadband (aka broadband stimulus and USDA grants)? I have a novel idea for Congress and the FCC. Stop selling off the airwaves to big business and stop paying us to build broadband. Let’s just cut to the chase and get the spectrum out to the people who need it. Let’s stop pretending that selling off spectrum is the in America’s best interest. It is quite the opposite.

On the surface raising money from spectrum acutions looks like the government is being responsible but auctions are causing great harm.

To put this into perspective please imagine for a moment that a US “Farm and Crop Commission” (FCC for short) suddenly held property rights to all farm ground outside of the big cities in the United States. The only exceptions would be ground that was rocky or otherwise was not capable of real agriculture. Now imagine that Congress tells the FCC that the only access to this ground by family farmers or anyone else would be to buy it at auction. Now imagine that only a small portion of all the farm ground is made available at auction once every 5 to 10 years. Now imagine that the smallest parcel of ground would be millions of acres in 12 county wide sized blocks of ground with no ability to buy smaller parcels.  Next the FCC sets minimum auction price for a parcel of the ground at $5 Million dollars. There would be ZERO chance of a single farmer having access to even 1 acre of good quality farm ground in this scenario. How many family farmers do you think would survive trying to grow crops on the few rocky outcroppings on hillsides with no property rights of any kind? How much do you think food would cost if there were only 5 mega-farmers in the United States who grew all the food? Do you think we could get enough food to live if we only had 5 farmers who held a monopoly position on the only farm ground available to be farmed in the United States?

This is a travesty. I think once you really read the FCC / farm land metaphor above and understand what is going on then you will understand why the number one obstacle to Americans having access to cheap and plentiful broadband across the entire country is that WISPs (aka your broadband family farmers) are being deinied access to good quality spectrum under reasonable terms. WISPs do not expect a free ride. WISPs will pay good money for access to good spectrum. WISPs will pay license fees over time or raise enough money to buy a license for each tower as they build these locations. What we CANNOT do is pay millions or billions of dollars for access to good quality spectrum and try to compete at these spectrum auctions with the likes of at&t, Verzon, Sprint, etc.. We will lose every time in that scenario.

So we need Congress to act now today. We need them to tell the FCC to give us access to unused spectrum now. The auctions need to end now. The way to simulate the economy and give everyone broadband is one simple solution and it does not cost us a penny. We need to make spectrum available for broadband use in the US for free. Once a WISP, cable company, phone company, municipality or other organization uses this spectrum to serve up broadband to a significant portion of an area the FCC needs to grant an exclusive license to the entitiy serving the broadband at that location.

Think of it as homesteading. In the past the US needed to grow into the land westward so they allowed people free access to land if they settled it and lived on it and made it their own. That is how we quickly expanded our great country. We need to do the same thing now with broadband. We need to let people homestead the spectrum to grow our access to broadband. Spectrum Homesteading will do just that.

Congress – we plead with you now – stop auctioning off our spectrum and let us homestead it now. Pass a Spectrum Homesteading Act and let the free market flourish in building broadband access to 100% of Americans without a single penny of government subsidies.

3 Responses to Wireless ISP’s (WISP) – the other white meat of the broadband world.